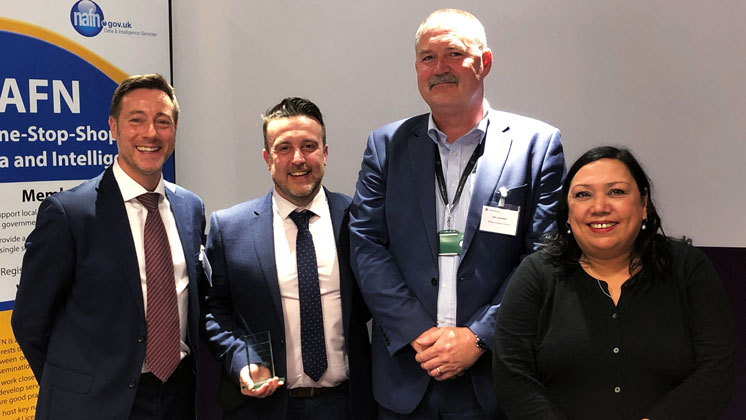 Cifas CEO, Mike Haley and Local Government Lead, Rachael Tiffen with some of the winners from FFCL awards in March 2019.

Back in 2013, the National Fraud Authority estimated that local authority fraud cost the taxpayer £2.1bn. The largest fraud types that contributed to this significant figure were procurement (£876 million), housing tenancy (£845 million), payroll (£154 million) and council tax fraud (£133 million). Amid dwindling counter fraud staff and smaller budgets, local authorities have continued to work collaboratively on the front line in order to protect the public purse.

At Cifas, we’ve recorded a 38% increase in the total number of fraud filings recorded to the National Fraud Database by our members between 2013 and 2017, alongside a 34% increase in the value of annual member savings. As such, the likelihood is that, despite staff at local authorities working across organisational silos and improving technology, the cost of fraud will have increased.

Over the last year, we’ve been focusing on increasing our insight at Cifas into the challenges facing local authorities. We now provide the secretariat to Fighting Fraud and Corruption Locally, maintain our own Local Authority Steering Group, and, in January, we welcomed councils to our offices for the inaugural Cifas Local Government Conference.

This all-day event invited local authority staff to hear from expert speakers from Cifas and others working in the counter fraud industry. An Organised Fraud and Intelligence Group roundtable also took place, allowing attendees to discuss stories and trends they had experienced, which revealed several common issues among those in discussion.

One participant described the event as, “a watershed moment for local authorities. For too long we have been on the outside of the intelligence network fighting cross-sector fraud. [We are] really looking forward to taking our seat at the table.”

Now, over a dozen councils have agreed to join Cifas as part of a year-long live pilot, running from April, with a second tranche of councils joining the pilot later this year.

During March, we’ll be training around 50 local authority staff on Cifas’ systems and enabling them, for the first time, to start using the tools and data that the majority of the financial services sector already employ in the fight against fraud.

The pilot will give participants access to the deep pool of high fraud risk data that Cifas holds, our wide network of partner organisations, and our tools and insight to better inform their investigations into fraud cases.

Data sharing and collaboration are at the core of everything we do at Cifas and we are delighted to be adding more partners to the battle against fraud in the UK.

Find out how your local authority could benefit from Cifas membership

In the coming months, we will expand the network and offering to more local authorities. If you work for a local authority that might be interested in joining Cifas, and want to know more about the pilot, or how to attend one of our events, please email me, Cifas’ Local Government Lead, Rachael Tiffen or call me on 020 3960 7830.

Digital footprints online – what we leave behind

Have you googled yourself lately? Cifas' Senior Research Analyst has, and found a wealth of personal information she had left vulnerable online.

As many people’s thoughts turn to romance around Valentine’s Day, here are some expert tips to help online daters keep themselves safe from fraud.